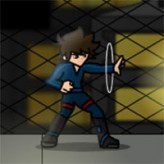 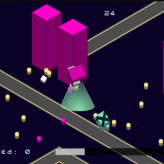 An evil robot corporation known as THEOS has taken of the world! Fight against them by shooting lasers out with your hands and with your other super powers in Humans!

Humans is a side-scrolling action platformer video game where you play the role of an enhanced human named Adlai. In this game, a cybernetic corporation known as THEOS has taken over the authorities of the world. Obsessed in “improving” mankind, they keep making genetic improvements that alter the very humanity. Without consent, THEOS abduct citizens for their experiments. This tyranny must be stopped, and you are the one that can stop it. Defeat evil robots and do your role in shutting down the corporation. Good luck!

Play Humans game online in your browser free of charge on Arcade Spot. Humans is a high quality game that works in all major modern web browsers. This online game is part of the Adventure, Shooting, Action, and Platform gaming categories. If you enjoy this game then also play games The Humans and Herding Humans. Arcade Spot brings you the best games without downloading and a fun gaming experience on your computers, mobile phones, and tablets. New arcade games and the most popular free online games are added every day to the site.