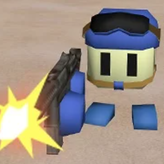 Throw yourself into the battlefield and get ready for non-stop action in Gunies IO! Fight against other players and win for your team. Check out the awesome weapons in this fun multiplayer third-person shooter game with a cool fantasy theme.

Lock and Load, Gunies IO is an online game that focuses on actual battles rather than collecting. Get into the middle of the action with your avatar and shoot-em-up. No more choosing where to drop as the game puts you in the middle of the action. Fight alongside other players in the world and win rounds by being the last man standing. Start with a measly handgun and upgrade by winning matches or collecting what other players have dropped. It's you against the world in this fast-paced game. Try to dodge others as you shoot your way through online dominance. With more than ten players fighting for the top spot, you will be hard-pressed not to get your adrenaline pumping to an online high. Matches can last from five to ten minutes, depending on your skill in cleaning up enemies in your wake. Once an enemy is downed, there is no reviving them, so practice your hand and eye coordination and shoot to your heart's content. If you die early, you can aim to restart or spectate to strategize your next move. The beauty of this battle royale is it's in your face action, no looking for that chest to grab a better weapon. Shoot the enemy and get what they have and dominate! There can only be one man in the end, and it's got to be you!

Play Gunies IO game online in your browser free of charge on Arcade Spot. Gunies IO is a high quality game that works in all major modern web browsers. This online game is part of the Arcade, Multiplayer, Action, and IO gaming categories. Gunies IO has 1 likes from 1 user ratings. If you enjoy this game then also play games Pokemon Fire Red Version and Super Mario Bros.. Arcade Spot brings you the best games without downloading and a fun gaming experience on your computers, mobile phones, and tablets. New arcade games and the most popular free online games are added every day to the site.