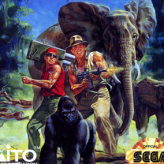 Take control of a brave forest ranger who must protect the local wildlife from a group of poachers in this old school action game – Growl! Prevent the animals from being driven to extinction and teach the evil poachers a lesson they won’t soon forget.

Growl is a classic belt-scrolling beat’em up action game released back in 1990 for the arcade and gaming consoles including Sega Genesis. The game features similarities to an outback Indiana Jones and is set in the early 20th century. Fight against hordes of enemy poachers with various weapons in a commando-style! Defeat some crazy bosses like a huge guy wrapped in dynamite that can throw cars at you! Will you be able to defeat all the bad guys and put an end to the illegal excessive animal poaching and hunting? Good luck and have fun!

Play Growl game online in your browser free of charge on Arcade Spot. Growl is a high quality game that works in all major modern web browsers. This online game is part of the Arcade, Action, Emulator, and SEGA gaming categories. Growl has 2 likes from 2 user ratings. If you enjoy this game then also play games Sonic 3 Complete and Sonic Mania Edition. Arcade Spot brings you the best games without downloading and a fun gaming experience on your computers, mobile phones, and tablets. New arcade games and the most popular free online games are added every day to the site.