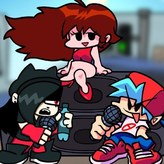 Battle Annie, wearing a short-sleeve shirt and red-colored pants, looks like something out of a goth concert! Prepare yourself as she might look out of place in a music battle, but she can string combos just like the best of them. Battle Annie carries a bottle of mysterious liquid to take the crown from you and become the rap champion of the week. With five weeks’ worth of songs, the fight for supremacy has reached insane levels.

Enjoy the rhythm and beat of:

Throw down and prove that the crown will stay with its rightful owner no matter who you are facing. Annie’s music tends to lean on more of a techno style rather than booming bass drops, so pay attention as the beat connects to the on-screen arrows you need to press. Friday Night Funkin' vs Annie takes the music and turns it into an extravaganza. Do not let the darkness take over. Rap on!