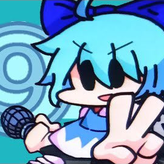 Two peas in a pod, this is what Friday Night Funkin' Touhou Mod Pack is all about. This mod is a crossover of the Friday Night Funkin' game and The Touhou Project, a bullet hell shoot-em-up series. Released in the NEC PC-9800 computer series, the game is notable for its source of Japanese content and creating an extensive fan base. Generating art, music, video games, and memes. The characters look like they are straight out of a cartoon series.

Coming into the Friday Night Funkin universe, they challenge Boyfriend to a battle of sick tunes. Tunes that mostly sound like anime themes, going from slow to blazing fast. Get ready to press the correct combinations as both characters battle each out on-screen. Like a rising crescendo, the tunes start from light to heavy as the battle rages on. Watch as girlfriend grooves, and her hair gets blown by the wind.

Get a high score by providing the correct sequence as you go back and forth with this anime lady.  Prepare yourself for some brief cameos that fans of the series would appreciate. This mod pack adds anime music to the mix. Are you ready for some kawaii battles? Sugoi!