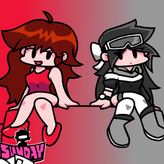 Just when you thought that Fridays could not get better, Friday Night Funkin' Salty’s Sunday Night is a complete overhaul mod of the sensational FNF game. This mod features new graphics, songs, stories, and charts. Join Salty as she embarks on a journey to escape the world inside the arcade cabinet.

As the saying goes; don't fix it if it ain't broke. However, good can be great with a little bit of work. This fantastic mod overhauls the Friday Night Funkin experience. In an old arcade cabinet in Daddy Dearest’s basement, a group of lost souls becomes active during Sunday nights. Salty, the last one to be trapped, gets his memory back and must find a way to get out.

The Story is separated into four eras: