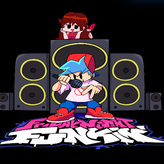 This fan-made version of FNF features five rap-battle opponents: Daddy Dearest, Doomy, Pico, Mom, and Fandom. However, you will only get to play with one song (whoever your opponent is), and the pattern and speed of the beat remain the same. The initial part of the song is almost impossible to get but fret not. If you persevere, you can regain your momentum and turn the tide of the battle in your favor. Will you be able to win the hands of Girlfriend?

Warning: This game is still in its early stages of development, and the game can only be played with the mouse. Unfortunately, the current version of the game features some incomplete controls and is almost unplayable in some cases.