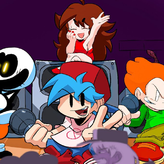 Master the original songs while getting immersed with the high-definition graphics in Friday Night Funkin' HD. Play with new dialogues each week and beat Daddy Dearest once again. Get ready for some major rap battle, as Daddy Dearest takes the challenge to the next level.

More than just a new coat of paint, Friday Night Funkin' HD created by Kolsan and his team features an unofficial update to the original Friday Night Funkin' by ninjamuffin99. Just like the original game, you must play the role of Boyfriend trying to rap battle your hot girlfriend's dad (and a bunch of other characters) to impress him and get his approval and become his son-in-law. The game also adds a load of new ideas, dialogues, and scenes that provide a unique backstory for the vents in the game.

This game only features up to Week 4. The following levels are available:

Although Kolsan's HD mod stayed faithful to the original game and features many things that are canon, many dialogues and ideas are original to the author that may be disproven when the official FNF lore will be released.