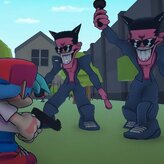 Rap battles just won't cut it anymore! Bring out the guns in Friday Night Funkin' FPS! Find and defeat Daddy Dearest with a well-aimed shot on the head and save your girlfriend in FNF FPS. And by the way, Daddy is also holding a gun.

Friday Night Funkin' FPS is a wonderful 3D third-person shooter developed by Gamasexual. The game features the lore, the characters, and the art of the sensational Friday Night Funkin' games, but with thrilling, action-packed shooting gameplay. While it is true that the song is mightier than the sword in the 2D world of FNF, the same cannot be said in the 3D world FNF FPS. Play the role of Boyfriend and face your nemeses and all their minions. Defeat Daddy Dearest in his own game and go back to your girlfriend at all cost.

The game features a total of six stages (known as six weeks). Each week, you will face a different rival whom you must find defeat while avoiding all of his underlings. Your rivals will have their weapons out, too, so be sure to engage them when it is most favorable to you. Save your bullets and don't shoot the minions unless you absolutely have to, or you won't have enough to take down your rival.