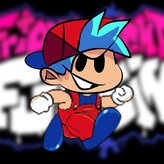 Boyfriend is running late for his date with his Girlfriend. Help Boyfriend reach his destination in this platformer game - Friday Adventure Night. Will you be able to make it through the night in this Mario-like world?

Friday Adventure Night is a visual modification of the fan-made game Mario! I Guess. This game swaps the avatar of Mario and Princess Peach with Boyfriend and Girlfriend from the sensational rhythm game Friday Night Funkin', among with a few small changes and alterations.

Most of the enemies you will find in this game resemble those in the Super Mario universe, and many will react the same way. You can trample the snail enemy to make it go back to its shell, then push the shell to hit other enemies, just like the turtle Koopa Troopa from Super Mario.

In this game, your goal is to complete the level within 300 seconds and reach the end without losing all three hearts. There will be various monsters and obstacles along the way. One heart is deducted each time you get hit by an enemy or fall off the cliff. The game features a total of 100 levels - with each level being harder than the previous one.

Play Friday Adventure Night game online in your browser free of charge on Arcade Spot. Friday Adventure Night is a high quality game that works in all major modern web browsers. This online game is part of the Adventure, Platform, Unity, and Mario gaming categories. If you enjoy this game then also play games Friday Night Funkin and Friday Night Funkin’ Sarvente’s Mid-Fight Masses. Arcade Spot brings you the best games without downloading and a fun gaming experience on your computers, mobile phones, and tablets. New arcade games and the most popular free online games are added every day to the site.