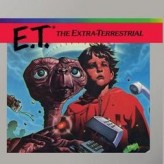 Join E.T. as he finds every piece of the interplanetary telephone and contact his home planet in this retro adventure game – E.T.: The Extra-Terrestrial! Play this Atari game that caused some major uproar to the gaming industry!

E.T.: The Extra-Terrestrial (or simply E.T.) is a retro adventure video game based on the film of the same name. The game harbored infamy back in 1983 and is said to have contributed to the collapse of Atari gaming franchise. Many critics said that this game is probably the worst video game in history. In this game, your objective is to guide E.T. as he tries to collect all three pieces of the interplanetary telephone that will allow him to contact his home planet and go back home.