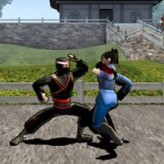 Embark on a grand journey with characters from different walks of life and save the world. Unite the people and awaken your destiny in Dragon Warrior IV! Fulfill a prophesy, fight monsters, meet new friends, and collect powerful weapons in this retro role playing game!

Dragon Warrior IV (also called Dragon Quest IV) is a 1992 RPG game and is a sequel to the game Dragon Warrior III. Although this game follows the same series, it features a different formula in gameplay. In this game, you no longer have the ability to change class and the game is divided into 5 chapters with 5 different story line all heading down to the same path. Each character in this game has their own back story and some scenes features guess characters that will temporarily join your party. The game also features a unique wagon system that makes travelling a lot easier! For a game created at the time, this game features advance concepts and mechanics and is considered one of the best games in the series.

Play Dragon Warrior IV game online in your browser free of charge on Arcade Spot. Dragon Warrior IV is a high quality game that works in all major modern web browsers. This online game is part of the Adventure, Action, Emulator, and NES gaming categories. Dragon Warrior IV has 8 likes from 9 user ratings. If you enjoy this game then also play games Pokemon Dragon Ball Z: Team Training and Dragon Ball Z - Super Sonic Warriors. Arcade Spot brings you the best games without downloading and a fun gaming experience on your computers, mobile phones, and tablets. New arcade games and the most popular free online games are added every day to the site.