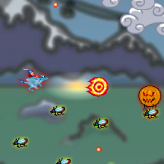 Ride your dragon and burn away other creatures and objects that fly in the sky in this shoot’em up game arcade game. Collect coins and upgrade your elemental weapons in Dragon Rider: Aeowinnies flight! Charge your attack to deal tremendous damage for a total destruction.

Dragon Rider: Aeowinnies flight features a complex elemental combat system that is crucial to learn before starting. The elemental system features 3 attacks which pair with an elemental aura. These elements are fire, electricity, and ice. Each element are weak against one but strong against the other (think about it as rock paper scissors). Improve your survival by switching elements and strategy in the middle of the game. Fight against other monsters in this cool dragon game.