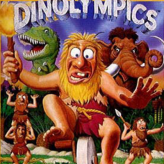 The humans are in need of help! Take advantage of various abilities and tools to reach the level’s objectives in Dinolympics! Be careful not to let a human die needlessly, as the number of humans you have will be carried over to the next level!

Dinolympics (also known as “The Humans” in different consoles) is a retro puzzle video game released back in 1992 for multiple gaming consoles including the Atari Lynx gaming system. Similar to the game Lemmings, in a sense, in this game, your objective is to manipulate the number of humans to achieve various goals like slaying and killing a certain monster, reaching a certain point, and more. You must use whatever resources you have, from the human skills and abilities to the available tools they have.

Play Dinolympics game online in your browser free of charge on Arcade Spot. Dinolympics is a high quality game that works in all major modern web browsers. This online game is part of the Arcade, Puzzle, Emulator, and Atari Lynx gaming categories. Dinolympics has 1 likes from 1 user ratings. If you enjoy this game then also play games Chip's Challenge and Baseball Heroes. Arcade Spot brings you the best games without downloading and a fun gaming experience on your computers, mobile phones, and tablets. New arcade games and the most popular free online games are added every day to the site.