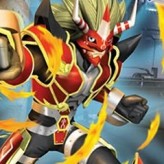 Compete as one of your favorite Digimon and battle tons of other monsters in a digivolving battle of wits and skills in Digimon Battle Spirit 2! Battle your way through various stages and try to overpower your enemy before the timer runs out!

Digimon Battle Spirit 2 is a fighting video game based on the animated franchise Digimon (Digital Monsters). The game follows the first game but with better controls, graphics, and gameplay. Crated for the Game Boy Advance System (GBA), the game features several characters with unique attacks and digivolutions. Player must collect spheres to alter the tag of war / power. The player that has collected the most spheres before the timer runs out is considered as the victor of the match.

Play Digimon Battle Spirit 2 game online in your browser free of charge on Arcade Spot. Digimon Battle Spirit 2 is a high quality game that works in all major modern web browsers. This online game is part of the Arcade, Action, GBA, and Anime gaming categories. Digimon Battle Spirit 2 has 1 likes from 1 user ratings. If you enjoy this game then also play games Pokemon - Digimon FireRed and Digimon Digital Monsters. Arcade Spot brings you the best games without downloading and a fun gaming experience on your computers, mobile phones, and tablets. New arcade games and the most popular free online games are added every day to the site.