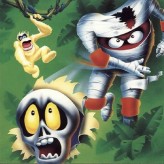 Go on some awesome underwater levels, run away from a crazy giant totem that’s chasing you, throw stone skulls to monsters, and do all other crazy stuff in DecapAttack! Collect power ups and have fun in this cool side-scrolling classic game.

DecapAttack is an underrated side-scrolling platformer video game released back in 1991 for the SEGA Mega Drive console. The game features well-designed characters, unique stages, and awesome challenging levels. Take control of a living mummy and go on some awesome and unique levels including some underwater scenes. The game becomes harder for each stage with new monsters and obstacles to overcome. Will you be able to help the living and headless mummy become a real human? Good luck and have fun!

Play DecapAttack game online in your browser free of charge on Arcade Spot. DecapAttack is a high quality game that works in all major modern web browsers. This online game is part of the Arcade, Retro, Emulator, and SEGA gaming categories. DecapAttack has 2 likes from 2 user ratings. If you enjoy this game then also play games Sonic 3 Complete and Sonic Mania Edition. Arcade Spot brings you the best games without downloading and a fun gaming experience on your computers, mobile phones, and tablets. New arcade games and the most popular free online games are added every day to the site.