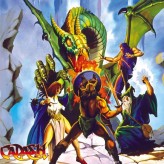 Play as a heavily armored fighter, a powerful mage, a self-supporting priestess, or a cunning ninja as you try to vanquish evil from the land in this action-packed 2D classic – Cadash! Defeat the Balrog and prevent the rise of evil from surfacing in the land.

Cadash is an action-packed side-scrolling adventure game filled with magic, swords, and sorcery. The game was first released back in 1989 for the arcade system but was later ported to other gaming consoles including the TurboGrafx-16. The game combines action platformer with role-playing elements set in a cool fantasy world. The game features 4 characters to choose from, each having their own sets of skills and abilities, as well as distinct game style. Good luck and have fun!

Play Cadash game online in your browser free of charge on Arcade Spot. Cadash is a high quality game that works in all major modern web browsers. This online game is part of the Adventure, Arcade, Emulator, and TurboGrafx-16/PC Engine gaming categories. Cadash has 2 likes from 2 user ratings. If you enjoy this game then also play games Cadash Classic and Bomberman. Arcade Spot brings you the best games without downloading and a fun gaming experience on your computers, mobile phones, and tablets. New arcade games and the most popular free online games are added every day to the site.