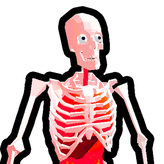 Be a one man army and invade the enemy base! Take down all hostile units and shoot all your enemies in 3D first person shooter game – Bullet Fire! Aim carefully and peek at every corner. Shoot at all the enemies before they shoot you!

Bullet Fire is a beautiful yet challenging 3D FPS game where you storm the enemy’s base by yourself. The enemy terrorists have cooped themselves in their base and your mission is to storm it guns ablaze and defeat all hostile forces. The game features 3 difficulty settings: Easy, Medium, and Hard. The level affects the damage you receive when shot. Don’t be reckless and try to sneak and peek on every corner to get the first shot!

Play Bullet Fire game online in your browser free of charge on Arcade Spot. Bullet Fire is a high quality game that works in all major modern web browsers. This online game is part of the Shooting, Action, Skill, and Challenge gaming categories. Bullet Fire has 3 likes from 3 user ratings. If you enjoy this game then also play games Bullet Force and Bullet Force Multiplayer. Arcade Spot brings you the best games without downloading and a fun gaming experience on your computers, mobile phones, and tablets. New arcade games and the most popular free online games are added every day to the site.