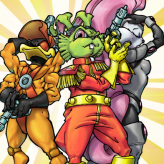 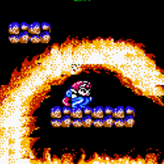 Travel across space and try to rescue your crew! Complete the challenging levels as you fight aliens in this action platformer game Bucky O’Hare! Cycle through all your unlocked characters in real time and complete all levels.

Bucky O’Hare is an action platformer video game released back in 1992 for the Nintendo Entertainment System (NES), and is one of Konami’s least known title that rivals Mega Man in gameplay. In this game, you play as the leader of the space team and your goal is to rescue the rest of your crew from the evil space toads. After you rescue your crew, you’ll be able to play as them. Each crew, has their own unique and special abilities that will change how the player can play the game (i.e. Extra Jump, Line shots, etc.). Have fun.

Play Bucky O'Hare game online in your browser free of charge on Arcade Spot. Bucky O'Hare is a high quality game that works in all major modern web browsers. This online game is part of the Action, Platform, Emulator, and NES gaming categories. Bucky O'Hare has 1 likes from 1 user ratings. If you enjoy this game then also play games Bucky O'Hare Retro and Bucky O’Hare Classic. Arcade Spot brings you the best games without downloading and a fun gaming experience on your computers, mobile phones, and tablets. New arcade games and the most popular free online games are added every day to the site.