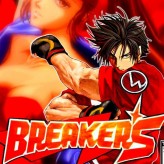 Join the Fighting Instinct Tournament (FIST) and beat all opponents you face. Choose a character from different parts of the world and participate in this deadly tournament in Breakers. Go head to head with other martial arts masters including your very own clone.

Breakers is a competitive fighting game developed by Visco and was originally released back in 1996 for the Neo Geo coin-operated arcade platform. Gameplay wise, Breakers is a generic brawler game with similar fighting mechanics as other SNK titles like Fatal Fury. However, Breakers feature one of the most bizarre and weird characters for a fighting genre. The game also boasts some random difficulty hiccups where the difficulty level of your opponent spikes to becomes really hard. Have fun!

Play Breakers game online in your browser free of charge on Arcade Spot. Breakers is a high quality game that works in all major modern web browsers. This online game is part of the Arcade, Action, Emulator, and Neo Geo gaming categories. Breakers has 2 likes from 2 user ratings. If you enjoy this game then also play games Ed, Edd n Eddy: Jawbreakers! and Metal Slug. Arcade Spot brings you the best games without downloading and a fun gaming experience on your computers, mobile phones, and tablets. New arcade games and the most popular free online games are added every day to the site.