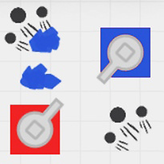 Drive a battle tank and help your team win the competitive match in this action-packed multiplayer IO game - BlockTanks IO! Sporting a cool minimalistic visual and simplistic gameplay, this game is highly competitive and fun.

BlockTanks IO is a top-down multiplayer tank shooter where players can face other players from across the globe. The game features 3 different servers you can play on: Asia, the USA, and Europe. Choosing the right server (based on your physical location) is ideal for playing with less delay. BlockTanks has five different game modes: Capture the Flag, Payload, Free for All, Teams, and Battle Royale.

In Capture the Flag, you must grab the flag icon and bring it back to your base to earn a score. In Payload, the tanks must escort the payload by being inside the control zone and bring the completion rate to 100%. Free for All and Teams are your standard Deathmatch and Team Deathmatch, respectively. Likewise, Battle Royale is a nice mix between survival and FFA.

The game features ten different weapons. The weapons are:

Knowing when and how to use each of the weapon is the key to victory Kill as many enemies as you can as you support your team and win.

Play BlockTanks IO game online in your browser free of charge on Arcade Spot. BlockTanks IO is a high quality game that works in all major modern web browsers. This online game is part of the Arcade, Multiplayer, and Shooting gaming categories. BlockTanks IO has 1 likes from 1 user ratings. If you enjoy this game then also play games Pokemon Fire Red Version and Super Mario Bros.. Arcade Spot brings you the best games without downloading and a fun gaming experience on your computers, mobile phones, and tablets. New arcade games and the most popular free online games are added every day to the site.