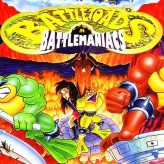 Silas Volkmire and the evil Dark Queen have joined forces to rule the world! Take control of the two heroes and stop them in Battletoads in Battlemaniacs! Challenge yourself in completing some difficult levels! The fate of the world is in your hands! Good luck!

Battletoads in Battlemaniacs is a beat’em up fighting and platforming video game released back in 1993 for the Super Nintendo Entertainment System (SNES). The game is an installment of the Battletoad series and features the two Battletoads Rash and Pimple as they go on a quest to stop the evil villain Dar Queen from ruling the world. The game features a remix of the mechanics and gameplay setting of the original Battletoads and features a wide variety of gameplay.