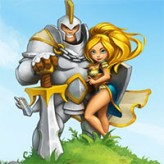 Take your knights and wage war with other nations. Fight for honor, glory, and supremacy in this awesome strategy war game – Battle Towers! Build cottages, military bases, and build an army of knights.

Battle Towers is a real-time strategy action game where you must defend your kingdom against orcs. In this game, the long-lasting peace between orcs and humans had been broken. Now you must survive orc raids at night, and attack their buildings during the day. During the night, orcs have added attack and defenses during the night, while they are reduced during the day. Complete all missions and save the kingdom. The game also features online multiplayer battles. Have fun and enjoy!

The game takes a while to load, thank you for patience.

Play Battle Towers game online in your browser free of charge on Arcade Spot. Battle Towers is a high quality game that works in all major modern web browsers. This online game is part of the Multiplayer, Strategy, Action, and Tower Defense gaming categories. Battle Towers has 1 likes from 1 user ratings. If you enjoy this game then also play games Sonic Battle and Bakugan: Battle Brawlers. Arcade Spot brings you the best games without downloading and a fun gaming experience on your computers, mobile phones, and tablets. New arcade games and the most popular free online games are added every day to the site.