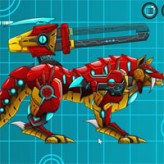 It’s the technological wolf age! Create a robotic mechanized wolf and battle other robots in this cool game – Battle Robot Wolf Age! Defend the city against the invasion and duel against other robotic wolves1

Battle Robot Wolf Age is a cool game with three separate parts. The first part is assembling your very own cool robotic wolf piece by piece. There are no time limit or accuracy, you just get to enjoy the cool animation. The second part is practicing the wolf’s attacks against a hologram. And lastly, to take the robot into actual combat by defending the city against the invasion. Each attack works like rock-paper-scissors and each one has their own reaction-based mini game to deliver bonus damage. Good luck!

Play Battle Robot Wolf Age game online in your browser free of charge on Arcade Spot. Battle Robot Wolf Age is a high quality game that works in all major modern web browsers. This online game is part of the Strategy, Action, Matching, and HTML5 gaming categories. If you enjoy this game then also play games Sonic Battle and Bakugan: Battle Brawlers. Arcade Spot brings you the best games without downloading and a fun gaming experience on your computers, mobile phones, and tablets. New arcade games and the most popular free online games are added every day to the site.