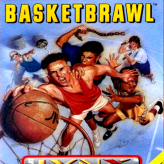 Shoot the ball and punch anyone who comes in between you and the ring in this action-packed sports simulation game – Basketbrawl! Beat up your opponent and outscore them to win an easy victory and boast about it!

Basketbrawl is a classic sports video game that was first released back in 1990 for the Atari arcade system. Unlike other sports video game, this simulation allows hitting and fighting with other players making it funnier and wackier. The game is very similar to the 1989 arcade game Arch Rivals, but features inferior graphics. Although the gameplay is slightly weak, the game is pretty fun and holds an interesting idea of combining combat with sports. The game is definitely one to try if you own the retro console.

Play Basketbrawl game online in your browser free of charge on Arcade Spot. Basketbrawl is a high quality game that works in all major modern web browsers. This online game is part of the Arcade, Sports, Emulator, and Atari Lynx gaming categories. Basketbrawl has 1 likes from 1 user ratings. If you enjoy this game then also play games Chip's Challenge and Baseball Heroes. Arcade Spot brings you the best games without downloading and a fun gaming experience on your computers, mobile phones, and tablets. New arcade games and the most popular free online games are added every day to the site.