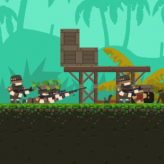 The terrorists have stolen some heavy missile payload! Deploy your special anti-terrorist units and rush to the point in Anti-Terrorist Rush! Use your infantrymen and deploy snipers correctly! Use vehicles and try to overpower the enemy defenses!

Anti-Terrorist Rush is a side-scrolling action war game where your goal is to deploy units strategically to wipe out the terrorists in the area and secure the missile they have stolen. The game features dozens of levels and several unit types to deploy. Each unit has their own strength and weaknesses so be sure to create a balance attack force. Complete your mission as fast as possible and try not to run out of time or they will launch the missile! Good luck!

The game can also be downloaded on Google’s PlayStore.

Play Anti-Terrorist Rush game online in your browser free of charge on Arcade Spot. Anti-Terrorist Rush is a high quality game that works in all major modern web browsers. This online game is part of the Arcade, Strategy, Fighting, and App gaming categories. Anti-Terrorist Rush has 1 likes from 1 user ratings. If you enjoy this game then also play games Super Mario Rush and Candy Crush Saga. Arcade Spot brings you the best games without downloading and a fun gaming experience on your computers, mobile phones, and tablets. New arcade games and the most popular free online games are added every day to the site.