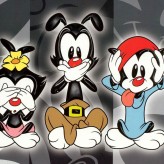 Animaniacs is a fun and cute puzzle platformer video game released for multiple gaming consoles including the Super Nintendo Entertainment System (SNES). Based on the animated TV series of the same name, the game features 7 Warner Bros.’ movie soundstages filled with hilarious hijinks. In this game, the player must take control of the three adorable characters as they try to collect 24 pages of script that was stolen by the antagonist known as The Brain. The game features many parodies of popular films during the time and has different stages based on different movie genres. Have fun!

Play Animaniacs game online in your browser free of charge on Arcade Spot. Animaniacs is a high quality game that works in all major modern web browsers. This online game is part of the Adventure, Arcade, Emulator, and SNES gaming categories. Animaniacs has 1 likes from 1 user ratings. If you enjoy this game then also play games Super Mario World and Super Mario All-Stars. Arcade Spot brings you the best games without downloading and a fun gaming experience on your computers, mobile phones, and tablets. New arcade games and the most popular free online games are added every day to the site.