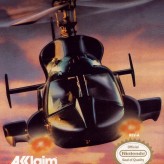 Ride and pilot an aerial predator and complete 30 action-packed missions in this old-school side-scrolling shooter video game – Airwolf! Rescue prisoners or lay waste from the sky in this cool retro game.

Airwolf is a classic helicopter shoot-em-up video game based on the 80s TV show of the same name. Developed for the Nintendo Entertainment System, the game was released back in 1989 and features 30 missions, each with their own objective. The layout of each level changes as the player progresses. The layout of the three bases is as follows: Home Base, Enemy AirField, and Prisoner base. Use your missiles to inflict greater damage to the enemies, especially to ground targets. Use the aircraft’s gun to deal with other aircraft in the sky. Good luck!

Play Airwolf game online in your browser free of charge on Arcade Spot. Airwolf is a high quality game that works in all major modern web browsers. This online game is part of the Shooting, Action, Emulator, and NES gaming categories. Airwolf has 1 likes from 1 user ratings. If you enjoy this game then also play games Super Airwolf and Super Mario Bros.. Arcade Spot brings you the best games without downloading and a fun gaming experience on your computers, mobile phones, and tablets. New arcade games and the most popular free online games are added every day to the site.