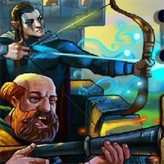 Save your friend Itan and hold off an army of undead as they try to rise from the grave. Use your bow, slingshot, and musket and survive all 13 Nights! Upgrade your abilities and stick together. Use each of the characters abilities to hold off waves of skeletons and gargoyles.

13 Nights is a strategy shooting defense game where you play the role of Itan’s friends. Itan studied for many years. When he finally found the ancient artifact that holds knowledge to the ancient nations, it was however, not what he was expecting. Engulfed with the power of the artifact, Itan began summoning hordes of undead to attack all living creatures. Itan’s faitful friends decided to hold back the horde while someone calls for back up from the empire. Will you be able to help them stop the horde for 13 nights?

Play 13 Nights game online in your browser free of charge on Arcade Spot. 13 Nights is a high quality game that works in all major modern web browsers. This online game is part of the Strategy, Shooting, Archery, and Challenge gaming categories. If you enjoy this game then also play games Five Nights at Freddy's 2 and Five Nights at Freddy's. Arcade Spot brings you the best games without downloading and a fun gaming experience on your computers, mobile phones, and tablets. New arcade games and the most popular free online games are added every day to the site.