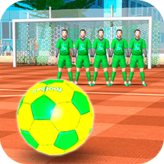 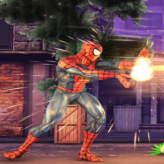 Pick a country to represent and compete against other countries in a cool street football game! Play along against an AI opponent or online with other players in Street Football Online 3D! Be the pride of your country and have fun!

Street Football Online 3D is a fun street football game where you can play against other online players to try and see who is the better player. The game also features single-player game where you can compete against AI opponents and try to bring honor and glory to the country you represent. Use the arrow keys to move your character and make sure to keep a close eye on the ball! Good luck and have fun!