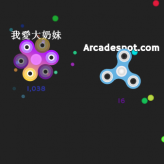 Can’t get enough of the fidget spinner madness? Then play with hundreds of players across the world in this arcade IO game – Spinz.IO! Spin as fast as possible and defeat all the other spinners in the world!

Spinz.IO is a competitive multiplayer IO video game where your goal is to collect as many dots as possible and spin faster than everyone else. By collecting dots, your fidget spinner will start spinning faster. There will be other fidget spinners in the area, and you can only defeat one that spins slower than yourself. Holding the left mouse button will make your spinner move faster but at a cost of 1 dot per second. Will you be able to make it to the leaderboard? Good luck and have fun!

This game can also be played on your mobile browser: Android and iOS.

Play Spinz.IO game online in your browser free of charge on Arcade Spot. Spinz.IO is a high quality game that works in all major modern web browsers. This online game is part of the Arcade, Multiplayer, Mobile, and IO gaming categories. Spinz.IO has 2 likes from 2 user ratings. If you enjoy this game then also play games Bonk.io and Slither.io. Arcade Spot brings you the best games without downloading and a fun gaming experience on your computers, mobile phones, and tablets. New arcade games and the most popular free online games are added every day to the site.