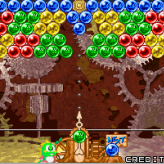 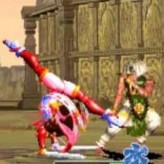 Play as one of the deities and battle all the others with your magical powers and strength. Select from eight characters and defeat all three bosses in Ragnagard! Use your skills in fighting and win in this fantasy fighting game.

Ragnagard, also known as Shin-Oh-Ken in Japan which means “True King Fist”, is a classic 2D arcade fighting game for the Neo Geo Arcade system back in 1996. The game features 8 selectable characters and 3 bosses (which can also be played through a code). All characters are based on Shinto deities and has a 3D pre-rendered pixelation making the game’s graphics somewhat unique.

How to Use the Boss Characters:

Play As Behemoth:
In character select screen, highlight Syuten-Dozi and press B, C, B, C, B(x2), C, then press A or D to select.

Play As Eelis:
In character select screen, highlight Benten and press C(x2), B(x2), C, B, C, then press A or D to select.

Play As Lucifer:
In character select screen, highlight Susano and press B, C(x3), B(x3), C, then press A or D to select.

Play Ragnagard game online in your browser free of charge on Arcade Spot. Ragnagard is a high quality game that works in all major modern web browsers. This online game is part of the Arcade, Action, Emulator, and Neo Geo gaming categories. Ragnagard has 1 likes from 1 user ratings. If you enjoy this game then also play games Metal Slug and The King of Fighters '97. Arcade Spot brings you the best games without downloading and a fun gaming experience on your computers, mobile phones, and tablets. New arcade games and the most popular free online games are added every day to the site.