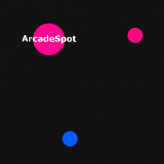 Play with thousands of players worldwide and try to become number 1 in the community! Eat smaller balls and become the biggest in Gota.io! Join and start playing instantly! Do you have what it takes to become #1?

Gota.io is a massively multiplayer arcade game similar to Agar.io. In this game, your goal is to become the biggest ball alive by eating smaller balls. The game features the same overall gameplay from Agar.io but has some few changes in the mechanics. The game is also divided into several servers so you can play with others near you for more optimized gameplay experience. Eat the balls smaller than you, whether they are other players or not. Show no mercy for the bigger ones will show none to you! Have fun!

Play Gota.io game online in your browser free of charge on Arcade Spot. Gota.io is a high quality game that works in all major modern web browsers. This online game is part of the Arcade, Multiplayer, Challenge, and IO gaming categories. Gota.io has 2 likes from 2 user ratings. If you enjoy this game then also play games Bonk.io and Slither.io. Arcade Spot brings you the best games without downloading and a fun gaming experience on your computers, mobile phones, and tablets. New arcade games and the most popular free online games are added every day to the site.