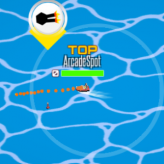 Get rid of all the boats in the ocean and become the greatest of them all in Boattle.IO. Climb on the top of the leaderboards and show them who is the best!

Boattle.IO is a multiplayer browser based video game and is one of the IO entry that is assigned to the British Indian Ocean Territory. In this game, each player will control an armed boat and will battle it out in the ocean for domination. Use your mouse to move around the ocean to avoid enemy boats or pursue them relentlessly. Try to avoid getting your boat out of the playing zone to prevent automatic death. Look for floating items (power-ups) in the map and get it to increase your chances of winning a battle. Good luck!

Play Boattle.IO game online in your browser free of charge on Arcade Spot. Boattle.IO is a high quality game that works in all major modern web browsers. This online game is part of the Multiplayer, Shooting, Unity, and IO gaming categories. Boattle.IO has 1 likes from 1 user ratings. If you enjoy this game then also play games Bonk.io and Slither.io. Arcade Spot brings you the best games without downloading and a fun gaming experience on your computers, mobile phones, and tablets. New arcade games and the most popular free online games are added every day to the site.