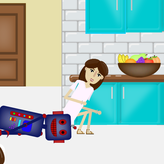 Play AZ Tank Trouble 4 and bounce your shots to destroy the enemy’s tank. Play with your friends along with a single computer in its 3 player mode!

Similar to the classic tank battle game, AZ Tank Trouble 4 is a retro-styled tank game with simple graphics and cool explosions. However, unlike the other tank battle games that the game is based on, AZ Tank Trouble 4 features a bouncing bullet. Bullets bounce off walls providing more excitement in the battlefield. The game can be played by a single player against an AI named LAIKA that is shown as a black robotic panther. The game also features a hot seat two player mode and a three player mode. Random power ups may also spawn inside the map. Some power ups change your weapon entirely, and mastering them all is the key to victory.

Play AZ Tank Trouble 4 game online in your browser free of charge on Arcade Spot. AZ Tank Trouble 4 is a high quality game that works in all major modern web browsers. This online game is part of the Arcade, Multiplayer, Action, and Retro gaming categories. AZ Tank Trouble 4 has 2 likes from 2 user ratings. If you enjoy this game then also play games Kirby and the Amazing Mirror and The Amazing Spider-Man 2. Arcade Spot brings you the best games without downloading and a fun gaming experience on your computers, mobile phones, and tablets. New arcade games and the most popular free online games are added every day to the site.